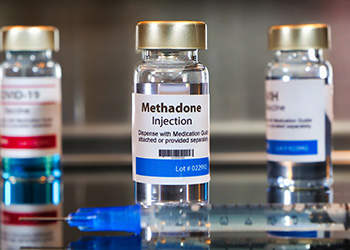 The opioid crisis has had devastating effects on British Columbians. Between 2015 and 2018, there were over 40,000 opioid-related overdose events and 4,551 deaths among residents. Life expectancy declined by 0.15 years from 2014 to 2016 as a result of opioid-related overdose deaths. In response to the crisis, a number of policies related to the prescribing of opioid agonist treatment (OAT) and opioids for chronic, non-cancer pain management were implemented.

Data access has been approved for a project to investigate the effects of these policies on both physician behaviour and patient outcomes to inform policymakers. The research team is lead by Dimitra Panagiotoglou, Assistant Professor at McGill University and the project is funded through a CIHR project grant.

OAT are pharmacological treatments (e.g. methadone, buprenorphine/naloxone or slow release morphine) that alleviate opioid withdrawal symptoms, thereby enabling people with opioid use disorder (OUD) to stabilize their addiction, while lowering the risk of overdose-related mortality and morbidity. In response to the crisis, BC mobilized a variety of policy levers to encourage physicians to expand access to OAT while reducing cost barriers to people with opioid use disorder.

Meanwhile, the College of Physicians and Surgeons of BC (CPSBC) released the Safe Prescribing of Drugs with Potential for Misuse/Diversion practice standard in June 2016. Unlike preceding opioid prescribing guidelines, which recommended courses of action and allowed physicians to “exercise reasonable discretion in their decision to act on guidance provided”, the new practice standard established minimum thresholds of professional behaviour. Legally enforceable under the Health Professions Act, RSBC 1996, c.183 (HPA) and College Bylaws, physicians found noncompliant can be disciplined or fined. Incorrect interpretations of the standards can result in aggressive weaning without consent and cause debilitating pain, serious withdrawal symptoms, and increased risk of overdose for patients who turn to illicit drugs for pain relief, and patient dropping.

This study aims to identify the intended and unintended consequences of the changes to OAT prescribing and the CPSBC’s practice standard for patients and physicians in BC.

“We will look specifically at the extent to which physicians’ prescribing behaviour has been altered, and identify the physician traits associated with variations in such behaviour,” says Professor Panagiotoglou. “We also seek to understand patients’ experiences with primary care access, continuity, and comprehensiveness following the implementation of these measures. This will provide stakeholders with evidence to enhance policies to provide better health outcomes for people who use drugs.”

The project will use a population-level, retrospective cohort study comprised of all BC physicians who prescribed any opioid medication during the study period (1 January 2013 to 31 March 2020), and their patients. PopData will link data from the CPSBC with BC Cancer Registry data and five data sets from the BC Ministry of Health for the project.

Beyond being of interest to local groups, the information gained through this study will be of interest to policymakers in other regions where similar policies have been implemented (e.g., within Alberta, Ontario, and Quebec).