Does access to natural space improve your mental health? 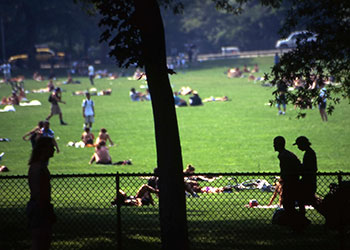 Almost a third of Canadians have experienced a mental health disorder at some point during their lifetimes, according to data from the Canadian Community Health Survey. In 2006 alone, it is estimated that mental illnesses accounted for a $52 billion economic burden.

“In light of their prevalence and impact, identifying population-level strategies to prevent or mitigate symptoms of mental illness would be of great benefit,” according to Emily Rugel, PhD candidate in UBC’s School of Population and Public Health.

“Research shows that exposure to natural spaces – areas such as parks, beaches, and gardens – has mental health benefits, particularly among individuals with pre-existing mental illness. However, there are gaps in the existing research, including a lack of robust exposure models and an overreliance on subjective outcome measures, such as people self-reporting anxiety or depression. These gaps are particularly troubling because cities across Canada have committed to providing accessible, high-quality natural space to residents, but lack the necessary data to understand the potential public health impacts of these planning decisions.”

Data access has recently being approved to link exposure data to antidepressant and anti-anxiety prescription drug dispensation records for Ms Rugel’s research. Key to the study is the application of a novel model of natural space exposure, developed by Ms Rugel with the support of her research supervisors, Drs Sarah Henderson and Michael Brauer. The study’s Natural Space Index (NSI) integrates information from multiple publicly available sources to create a comprehensive, multilayered model of potential natural space exposure across the metro Vancouver region. PopData will link model data to BC Ministry of Health and Statistics Canada Income Band data to inform the prescription drug study, which is part of a broader effort to illuminate the role of natural spaces in urban mental health.

“We hypothesize that individuals with higher natural space exposure scores will have lower odds of both incident antidepressant and anxiolytic dispensation after we adjust for a range of individual and population-level demographic, environmental, and social factors,” says Ms Rugel.

She hopes that the project will support the integration of mental health considerations into existing planning efforts, such as Vancouver’s Greenest City 2020 Action Plan, and to inform future uses of prescription dispensation data in health research.